Saturday, June 21st, on the summer solstice ‘the sun appeared to stand still in the sky’ for the horseback riders competing at Brek-n-Ridge Farm’s first 2014 summer event, the Stepping Stones Horse Show. The unaffiliated equestrian club in Northwestern Michigan is committed to having fun while advancing proficiency in the dressage and jumping arenas. Brek-n-Ridge barn and farm managers Kate Etherly and Greg Last with help from Andrew Figures and Gail Miller ran a smooth and polished dressage show.

A total of 46 entries competed with riders coming from Traverse City and barns in the outer regions of Harbor Springs. Starting at 9 am and ending mid afternoon, the judge Kari Merz of Black Star Farms in Traverse City made it home for dinner! “It was our most successful show in the 4 years we have been here. In the shade of our big trees we have a small park with picnic tables.  Brek-n-Ridge is a small stable yet we were able to offer many of our guests a box stall. Some riders stayed overnight and went for a trail ride we organized.” Says Karin Offield the farms owner. 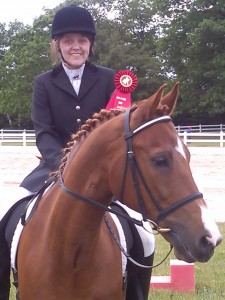 MacKenzie and her own Boomer

the daughters of the Beckett Family that own and operate Tapawingo Farms in Sault Ste. Marie.

The Introductory Championship went to a 15 year old black Dutch Friesian horse named Ulke. He earned the high score of the day of 66.8%. Rider Karin Offield says, “He has now earned his way into the canter divisions. At his first show he scored a 67.5%. He has been a four-year project of mine to teach him to become a suitable riding horse. He is the most amazing creature. I love him.” The Training Level Championship went home with Mary Louise Mooradian riding her own Bubba.

Karin adds, “The star rider of the show for me was MacKenzie Becker of Good Hart and Pinckney, Michigan. She had just graduated from high school and arrived on Tuesday to ride her horse Boomer who was boarded this winter at Brek-n-Ridge – and she jumped on him and was a STAR! I was so pleased with both of them.   I have said this before, and now after watching 4 years of offering riding lessons to kids it is more and more obvious to me that the stable can be a wonderful leadership school.  In our society, girls and most boys are not encouraged to participate, speak out or be in charge. In the barn, at our stable – all those qualities are practiced on a daily basis, perfectly matched with an amazing compassion toward the animals. It is a fact and there is no coincidence that many of the great business leaders in the world have an equestrian background.”